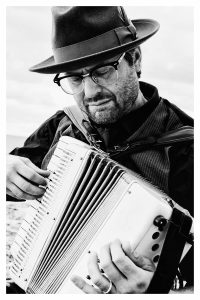 Justin Gorski began taking piano lessons at the age of 5, however he hated it at first. After years of playing and still not loving it, he didn’t stop playing music but instead decided, “I want to play music that I like.” Justin taught himself chord progressions, blues scales, and dove into the sounds of the 1950’s, 60’s & 70’s. He also wrote his first music around the age of 12. The feeling he got when he finished writing his first song was just so overwhelming.

Fast forward many years later into the world of Big Hoke. Justin has continued his love of music, particularly Americana and Folk Rock Revivalism. Justin has taken the Irish roots he picked up in his teens while traveling to Ireland to play in the Fleadh Cheoil. He started working in recording studios, performing live gigs– wherever he could play, he did. He picked up more classical training from the University of Dayton by attaining a Music Performance Degree, spent years honing improvisational skills playing with a variety of jazz and improv groups.

He returned to Cleveland in early 2000 and wrote his first solo album (My Last Date) under the moniker Big Hoke. While recording it, he made friends with some up-and-coming local musicians. Justin had the opportunity to open stages for a Paul Simon & Brian Wilson tour, wrote and recorded another full album (The Black Album), and started playing swing and jazz music.

It was around 2007 when, after finishing his third solo album (The Top), he met up with Roger Hoover of the Whiskeyhounds– later named The Magpies. Justin helped arrange and write songs for three albums (Jukebox Manifesto, Eastern Standard Time, and Strangers). He was also instrumental in The Magpies touring efforts. These tours spanned the U.S. and involved national and regional acts.

The Magpies disbanded in 2012. Justin spent some years working on much needed healing and got his shit together. He got married (to Laura Ross), started a vegan café (Cleveland Vegan), and started a family (has 3 little ones, Eli, Simone, & Hugo).

After discovering his friend Gordy Quist from The Band of Heathens opened a recording studio in Austin, Justin made plans to come and record an album with him. These sessions are what Big Hoke’s Home is all about.

Originals, a few covers, and a hell of a lot of heart are within those grooves of that vinyl. Fiddles, National guitars, hand claps, pedal steel guitars, tubas, trumpets, mandolins, cello, and percussion bring back the days true roots/rock music…and all of this is brought together by Justin’s untamed piano playing and warm vocals. After all the years of searching, recording, practicing, giving up, cleaning up, breaking down, meditating, writing and performing, Justin has finally come Home to roost in this latest release by Big Hoke.